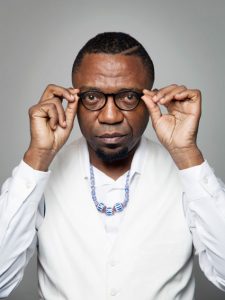 I was very distressed in 2011. We were marching into an election. I had used most of what a writer can use to have an impact – written books, some of them very successful, had published in newspapers, given interviews here and there in the media, the traditional media, and participated in festivals across the globe. I was a successful writer, I would say, and I had even used those traditional tools to achieve certain things – freeing an incarcerated singer from jail in 2008 was the highlight of my activism. Yet I wasn’t satisfied. I wasn’t satisfied because that year the Biya regime had opened a new chapter in African history – on April 14, Cameroon had become the first country where the term limit on the presidential seat was changed, opening a wave that would become very fashionable with African tyrants. I was not satisfied because in doing that, Paul Biya had desacralized a text agreed upon during a constitutional conference, but mostly because he had sent the message that texts are not worth a thought. And as a writer, I had mostly written texts. The historical significance of small infamous actions is generally forgotten – for instance, most people will be pressed to remember who did the first coup in Africa, when the genocide in Rwanda started with a coup. But in my opinion a serious writer should always know the moment when a form is born and when a genre has run its course. We do not write elegies today any longer, and was Homer a contemporary Greek writer, he certainly would not be the figure that we are taught in schools.

Dibussi Tande, a journalist friend of mine, who has also been my intellectual confident because we share the same past of having been members of the ‘Student Parliament’ during our university years understood my plight. He had gone through a similar despair, and had survived the onslaught of the internet on the traditional forms of journalism. It simply made sense, he thought that a similar seismic revolution would happen in writing in general. Why would writers still dream of composing novels in verse a la Pushkin, when most people were gravitating towards ebooks? Because I tend to be computer-challenged, he suggested to mentor me, and even had a name for the new persona I would become – he called that persona ‘Digital Man.’ I liked it and still smile at our conversation. It was a phone conversation. Facebook was in its infancy – in fact I didn’t know it existed –, and email was the tool we are talking about. I made mass emails my tool of communication, but their limit became evident when the filtering system of Hotmail and Gmail transformed my angry texts into spams. What was there to do? I saw my prose come back to me in the form of refused mails, of not sent mails, and only sparely did I receive a response – a short one mostly: ‘remove me from your emails!’ Or: ‘who gave you my email?’ Some writers used blogging as a way to bypass such walls of incomprehension, but here too, the certitude of its relation to action left me in my writer’s limbo.

Dibussi had a blog I still love, but about blogging I would say this: it trained my mind and gave me a method. It taught me this: be systematic, always have key themes people identify you with, always personify the issues, be honest and frank, address issues they won’t talk about. If none but Andrew Sullivan would stand here as my daily teacher, it is the fall of Ben Ali that made me gravitate towards the social media. For the Arab spring answered the question I was asking: how can I reach people today, without being in Cameroon myself? It is the old question of frustrated writers for whom books had become an unsatisfying answer. In the 70ies it made Ngugi gravitate towards theater, and Sembene Ousmane become a filmmaker. For the writer that I am, the move towards the social media meant a transformation of my way of writing, and the structuring of my mind around new forms, and a new genre – my texts became shorter than the ones I was sending as mass emails, and I added pictures to them. Some I took, many I was sent by my followers, but most I simply downloaded from the immense internet. That I finally wrote a novel – it is called Empreintes de crabe and will be published in August in Paris – together with my followers, and I call that way of writing ‘choral writing’, is something I would not have imagined, but in arresting me, jailing me and charging me with insulting the tyrant in a Facebook posting, the Cameroonian government finally legitimized the Digital Man it took me close to ten years to compose. In making me land in Kondengui, it gave me the ground I had been looking for as a writer. The old Enlightenment genre of libels has thus been revived, as very few Cameroonians are willing to forget the words I routinely used to address his wife in my postings – ‘wolowos.’[1] It still blows their mind that a first lady would be called that way. But history is my guide.